Pakistan a Land of Cultural Diversity

Pakistan a Land of Cultural Diversity many splendours located in the heart of the South Asian Subcontinent. It’s a country with its own history and cultural heritage. The country’s culture has been established over thousands of years, with many civilizations inhabiting the region helping to influence everything from cuisine and music to literature and art.

Our culture is rich in a variety of dresses, sports, traditions, languages and foods. Pakistan’s culture is enriched in traditions and represents the history of this region. Pakistani people and society have an exclusive lifestyle, thoughts and morals. The inhabitants of every province have diverse cultural values which make them different from other groups of the society.

Pakistan a Land of Cultural Diversity

Punjab (the land of 5 rivers) is that the biggest acreage of Pakistan and is popularly known for its culture. According to population, 56% of the entire population of the country is situated in Punjab Province. It consisted on 36 districts and contributes approximately 50-60 per cent of the economy.

The poetry of affection and war, fairs and festivals, dancing, music and Punjabi literature are among the characteristic expressions of the Punjabi culture. The people of Punjab love their culture. Punjabi culture is among the oldest and richest cultures in world history, dating from ancient antiquity to the digital era.

Punjabi culture has deep roots in Sufism. Sufi saints spread the message of Islam by living their lives in line with the Islamic way. The followers of those saints arrange fairs and festivals to pay tribute to them. The fairs and festivals showcase cultural traditions and folklife.

The most prominent musical kind in Punjabi culture is the Bhangra and it’s slowly taking up the mainstream music industry. Due to its long history, different dance forms have emerged and developed. Other popular dance styles are Sammi Dhamal, Sankara Juli and Lodhi.

The most popular dish in Punjabi cuisine is Tandoori chicken. Most Punjabi food is eaten with either rice or roti. There are some dishes that are exclusive to Punjab like lassi, Paratha, Makai ki roti, Saron ka Saag, Haleem, Biryani and other spicy dishes are popular. In beverages, tea is consumed altogether seasons and as a custom, most of the Punjabis serve tea to their guests. Punjabis are also fond of Zarda, Gulab-Jamuns, Kheer, Jalebi, Samosa, Pakorey etc.. These cuisines have become world-wide delicacies with large scale representation.

Punjabi people are very warm-hearted and fun-loving. Punjabis are a heterogeneous group comprising of various tribes, clans, communities and are known to celebrate each and each tradition of their culture. Punjabis also believe cast system but as now people are becoming educated, the differences are becoming blurred.

Punjabi people have a fanatical interest in sports. Punjabi’s are a fan of kabaddi, and wrestling, which is additionally popular in other parts of Pakistan and it’s also played on a national level. Other games being played in Punjab region include Gilli-Danda, , Yassu-Panju, Pitho-Garam, Ludo, Chuppan-Chupai, Baraf-Panni, Kathy and a few major sports include cricket, boxing, horse-racing, hockey and football. National Horse and Cattle Show at Lahore is that the biggest festival where sports, exhibitions, and livestock competitions are held.

There are numerous festivals which are celebrated by Punjabi people including some religious festivals like Eid-Milad-Un-Nabi, Jumu’ah, Laylat-ul-Qadr. The capital Lahore is widely popular for its entertaining events and activities. Lahori’s are famous everywhere the country for celebrations particularly for Basant festival (kite flying) within the spring season. Other festivals celebrated in Punjab region include Baisakhi, Teej etc.

Punjab is very rich with literature and Sufis adds more in its literature. Some famous poets of Punjabi are Sultan Bahu, Mian Mohammad Baksh, Baba Farid and Shah Hussain. Waris Shah, whose contribution to Punjabi literature is best known for his seminal work in Heer Ranjha, known as Shakespeare of Punjabi language.  Bulleh Shah was a Punjabi Sufi poet, a humanist and a philosopher. The verse form Bulleh Shah primarily employed is called the Kafi, a style of Punjabi. Some other popular folk tales of Punjab include Sassi-Punnu, Sohni Mahiwal etc. that are passing through generations. 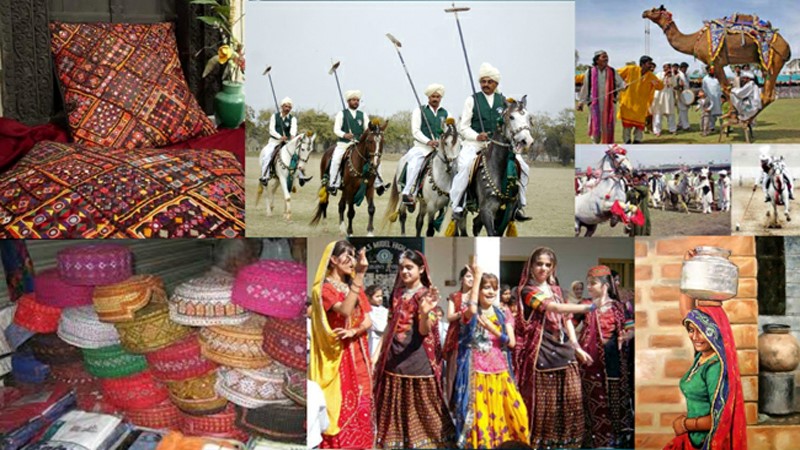 Sindh has been named after the well-known River Indus. In Sanskrit, the area was named Sindhu meaning a sea. Around 3000 B.C, Dravidian societies urbanized and offered to ascend to the Indus Valley Civilization. In the ongoing history, Sindh was conquered by the British in 1843. Sindh territory remained the piece of British India until 1947 when it was made one of the territories of Pakistan.

The Sindhi language developed over a time of 2400 years. The language of the individuals of Sindh, subsequent to coming in contact with the Aryan, became Indo-Aryan (Prakrit). Sindhi language, hence, has a strong base of Prakrit just as Sanskrit, the language of India, with jargon from Arabic, Persian, and some Dravidian – relatives from Mediterranean sub-mainland. Different dialects are Saraiki, Kutchi, Memoni, Brohi and Dhatki.

Ajrak and Sindhi Topi are the symbols of Sindhi’s way of life and progress for a large number of years. Ajrak, essentially, is a name given to one of a kind block print shawls. Sindhi culture shows unique plans and pattern in these shawls. Commonly, red, black and yellow colours are utilized while making these shawls.

Sindhi food alludes to the local cuisine of the Sindhi individuals from Sindh, Pakistan. The everyday nourishment in most Sindhi family units comprises of wheat-based level bread (phulka) and rice in the midst of two dishes, one sauce and one dry.

The area of Sindh invites and has the conventional games like Kabaddi, Malakhra, Wanj Watts, Horse Dancing, Horse Racing and Cattle Race sent on their particular affiliations

Sindhi society is dominated by great Sufis, the mystics and the martyrs. It has always been the land of peace, love and great cultural and artistic values. There were the great Sufi (spiritualist) artists like Shah Abdul Latif Bhitai who was the cherisher of truth and spent his life for spreading peace. Bhitai was additionally an astounding artist.

People of Sindh are more inclined towards an agricultural based lifestyle. The fertile Indus Plains provide a valuable source of income for the local people who practice farming on these lands Itinerant way of lifestyle is commonly seen in the deserted regions of Thar where people move from place to place in search for drinking water sources along with their animals. 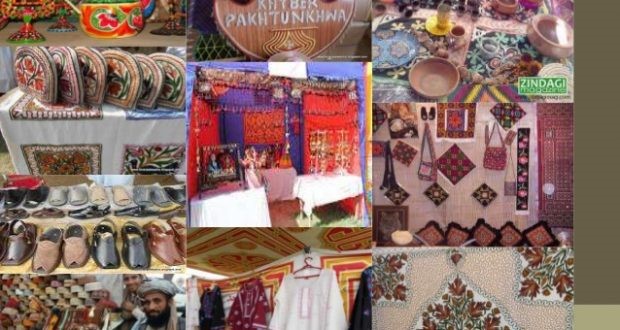 There were theories ranging from Pakhtuns having an Aryan, Jewish, Arab or mixed origin. None was convincing enough to form a conclusion.

One of the most popular dishes are tikka, serge, sugi ka halwa, kawa, chapli kabab, kabala paleo, and long naans

Pathan is extremely well known for their poetry, they are enthusiastic and devoted which is clear from their poetry. A portion of the celebrated writers is including Amir Koror Suri, Khushal Khan Khattak, Rahman Baba and numerous others.

Pashtun men commonly wear a Partoog-Korth in Pashto (salwar kameez is Urdu) with a pakul (Pashtun cap). In the Kandahar area, youngsters wear diverse kind of cap like a topi and in the Peshawar locale, they wear white kufis. Pioneers or tribal chiefs some of the time wear a karakul cap, like Hamid Karzai and others. Ladies and young ladies wear customary long dresses with a light bit of material used to cover their hair. They additionally wear excellent handcrafted gems and wonderful Pashtoon dresses.

Baloch culture is inverse to the general recognition about it. Despite the fact that Balochistan is a zone of fruitless grounds, deserts and mountains, the Baloch culture is brimming with conventions, and artworks. Balochi weaving is one of the most well-known crafts, which are done by the females. Another component of Baloch culture is the narrating convention. Artists and story tellers are exceptionally regarded in Baloch culture. 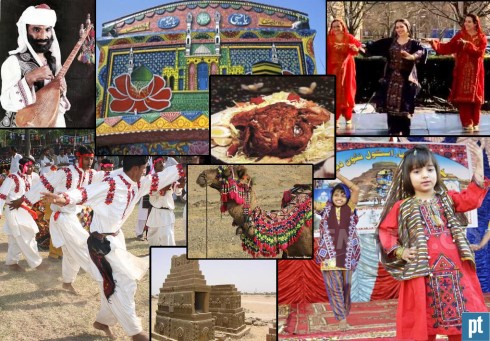 Like the other parts of Pakistan, the national dress shalwar kameez with particular augmentations and adjustments are worn in Baloch culture. The individuals spruce up pleasingly and similarly in all the clans. Turban is the normal headwear of Bloch men alongside wide loose shalwar alongside knee-long shirts. Females dress comprises of a shirt having a major pocket and weaving and implanted round mirror work in front. A major Dupatta/Chaddar are taken to cover the head and shoulders.

Normally Baloch individuals have meals in the morning and night. Millet and rice are a piece of the Baloch feast. Meat is additionally a significant part; “Sajji” is the most loved dish of individuals. Milk, butter and vegetables are likewise part of Balochi food.

Learning management system
How to score high marks in entry tests for universities
Competitive Exams in Pakistan
What does an interior designer do?

SCAN THIS QR CODE WITH YOUR PHONE